Posted in Inspiration on June 21, 2010 by James Penman

As previously hyped, we had the pleasure of attending the (hopefully annual) Designer/Developer Workflow Conference this past weekend right here in Kansas City. What was it about? Well, here’s the description from the website:

What’s the big deal about workflow? Workflow is something we all do, day in and day out – although you may not even think about it. Do you work with multiple applications during the day? Do you work with team members, departments, clients, etc.? Improving those workflows is what D2W is all about.

It was a meaty conference, as you can imagine. Whatever your skill level or discipline, you were likely to have learned something excellent. Divided into “Designer,” “Developer,” and “Hybrid” tracks, there was a lot on the platter.

Doug Winnie from Adobe gave the keynote address and introduced Flash Catalyst to the audience. It’s a new tool in our toolbox and one I honestly haven’t had much time to investigate. I had the sneaking suspicion that it was aimed at designers who wanted to be able to make things move and click without Actionscript, generating sloppy code along the way like oldskool Dreamweaver used to. Not so! It’s actually a really useful piece of software that fills in a key step between Design and Development, one that we’ll be working to include in our own projects sooner than later.

I had a few favorite sessions beyond that. First was Doug Winnie, Aaron Pederson, and James Polanco talking about the pitching, designing, and developing of Adobe Workflow Lab. We were lucky enough to have access to advanced copies of the next release of the software.

Also, Seb Lee-Delisle spoke about how his company, Plug-in Media, approached their BAFTA award-winning “Big and Small” website (amongst others). It was really interesting to see how they tackle things. We took away a few tips we’ll consider employing ourselves. On day two he also gave us a snappy overview on the basics of platform game engines in Flash.

The speakers and organizers did a great job with the conference, so I am really surprised about how small the turnout ultimately was. Not that I’m complaining; it meant that we got to hang to hang out with the presenters in cool situations like the dinner pictured below. We’re the sexy fellows on the left. 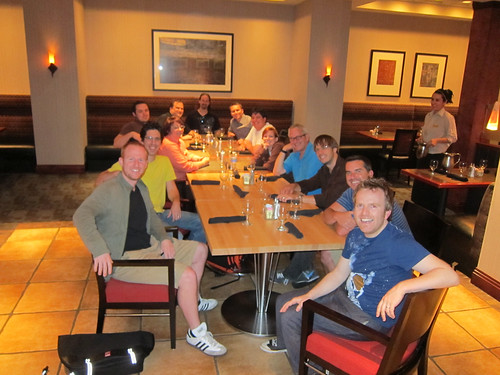 You can check out more pictures of the event on Aaron Pederson’s Flickr set.